Stand back or hold on tight, this is the most powerful offroad competition bike on the market. The latest generation KTM 500 EXC-F packs a thrilling 4-stroke punch while still delivering outstanding rideability. Thanks to its lightweight chassis and compact high-tech engine, this large-displacement power machine is surprisingly light with excellent agility. As a result, this awesome 510 cm3 SOHC single cylinder bombshell has an incredible power-to-weight ratio and provides nothing less than the most dynamic enduro experience available. 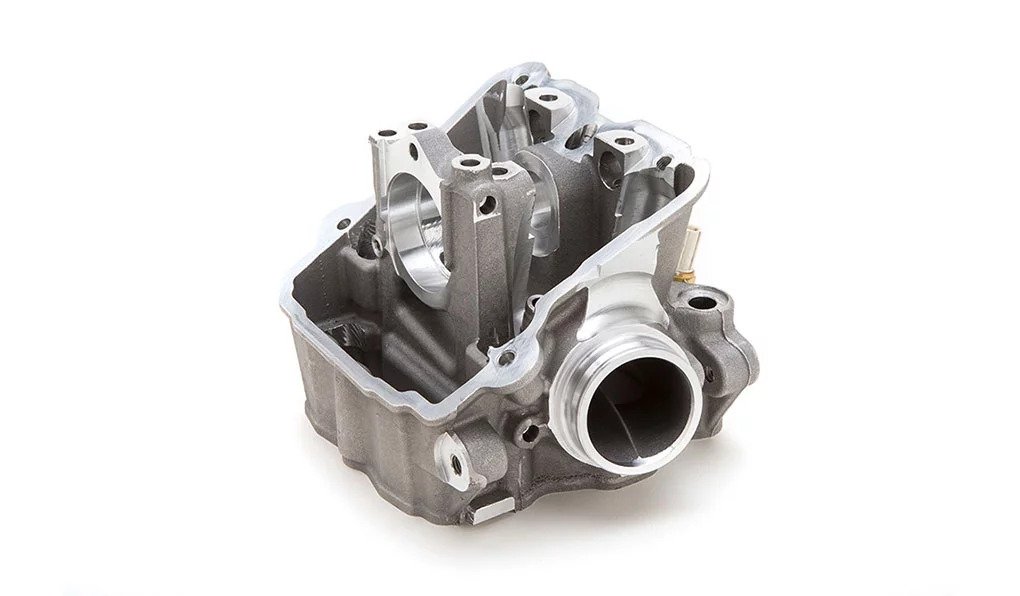 The 500 EXC-F engine is fitted with a newly developed SOHC cylinder head which is much more compact, 15 mm lower and 500 gr lighter improving the mass centralization and contributing to even better handling. The gas flow through the newly shaped ports is controlled by a new overhead camshaft which is now closer to the center of gravity for improved handling. It features a better axial fixation of the de-compressor shaft and a new, more efficient integrated engine breather system. The four new valves are shorter and adapted to the new head design, but retain the same valve timing as the predecessor. The rocker arms have been optimized with a stiffer design, guaranteeing more constant performance throughout the rpm range. A shorter timing chain and new low-friction chain guides contribute to the engine's overall reduced weight and lower friction. The new head configuration promises more efficient power delivery and unrivalled performance.

The KTM 500 EXC-F's crankshaft is located in an ideal position close to the centre of gravity, contributing to easier handling. It utilises a short connecting rod, which makes for an overall compact and lightweight engine with a snappy power delivery. A plain big (bottom) end bearing with two force-fitted bearing shells runs directly on the crank pin. The engine's pressurized lubrication system provides the necessary oil feed for this bearing. This design has a direct benefit for the crankshaft with extended service intervals, which are lengthened due to the plain bearing. So just pin it, all day long.

The EXC models feature reworked engine cases, reducing the weight by nearly 300 g. The design allows for a very centralized shaft configuration, making the engine very short and compact, while contributing to an efficient centralization of mass. Additionally, the engine covers feature a smart surface structure which reduces wear caused by the rider's boots, keeping them looking as fresh as the day you bought it, while a new reinforced clutch cover means the engine is more robust, even in rocky terrain.

Maintaining the optimal engine temperature and consistent horsepower throughout the ride. The KTM 500 EXC-F features newly designed radiators which are mounted 12 mm lower than the predecessors, lowering the centre of gravity, matching the design of the new shrouds perfectly and providing perfect ergonomics. By using CFD technology (Computational Fluid Dynamics) and a smarter coolant circuit routing, the innovative system ensures optimum engine temperature for the highest performance, in all conditions. Above all, a reworked delta distributor, integrated into the frame triangle has a 4 mm larger centre tube, increasing the cross section by 57%, so coolant flows from the cylinder head to the radiators more efficiently. This is further aided with the help of a radiator fan as standard. The radiators have special protectors that protect from flying rocks and debris while also acting as a brace to disperse energy around the radiators in the event of an impact.

When it comes to improved power delivery and performance, the new exhaust plays a key role and packs a punch that is hard to beat. All 4-stroke EXC models feature new, two-piece header pipes (two parts instead of one on the predecessor) which can now be disassembled much more easily and which allows better access to the shock. The aluminium muffler sleeve has a newly designed, slightly larger profile with a new end cap. Compared to the predecessors they are shorter and more compact, bringing the weight closer to the centre of gravity for better mass centralization.

All EXC models feature new high-tech, lightweight chromoly steel frames. This includes hydro-formed elements produced by state-of-the-art robot welding. They retain their race-proven geometries, but by re-designing certain areas they now have a higher lateral, longitudinal and torsional stiffness, resulting in better feedback for the rider, playful handling and improved stability. The laterally attached engine head stays (the connection between cylinder, head and frame) are now made of aluminum, reducing vibration and further contributing to precise cornering. The bikes also feature newly designed lateral frame guards with a structured surface, improving grip, while also serving as a heat protector against the muffler on the right side. The subframe is made of extra-light and stable aluminum profiles, weighing less than 900 gr and is 40 mm longer than before, providing better rear fender stability.

KTM uses lightweight, CNC-machined hubs and high-end GIANT rims on all Enduro models, guaranteeing maximum stability and minimum weight. For 2020, the aluminum spoke nipples feature a reworked design, which conveniently reduces the frequency with which the spokes need to be tightened.

All EXC models are fitted with the latest 48 mm diameter, WP XPLOR upside-down forks, featuring a split fork design developed by WP and KTM. While each side is fitted with springs, they have separate damping functions. Compression damping is on the left and the rebound on the right. Both can easily be adjusted via the dials on top of both fork tubes with 30 clicks each. Although already distinguished for outstanding response and damping characteristics, the 2020 fork features a calibrated mid-valve piston for more constant damping. It also has new upper fork caps and clicker adjusters for easier adjustment with a new color and graphic design. The new settings keep the front end higher, providing increased reserves against bottoming out.

The WP XPLOR shock absorber is the key element on the proven PDS rear suspension design (progressive damping system), where the shock is directly linked to the swingarm without an additional linkage system. This keeps weight lower and reduces the chances of hooking on rocks. Optimal enduro-specific damping progression is achieved by using a second damping piston in combination with a closed cup towards the end of the stroke, and supported by a progressive shock spring. For 2020, improvements to the second piston, as well as a reworked shape and sealing of the cup, lead to improved resistance against bottoming without any sacrifice of comfort. New settings on the XPLOR PDS shock provide better damping characteristics and match the new frame and reworked front-end set-up perfectly. It is fully adjustable, including high and low-speed compression, so you can set the shock up to suit any track, trail and rider preferences.

You can't brake any harder, better, faster or stronger. High-tech Brembo calipers are combined with lightweight Wave brake discs. The steel-flex front brake hose has efficient protection and there's an integrated channel for the speedometer cable. First you outrun them, then you outbrake them.

All models in the EXC range are fitted with newly designed lightweight polyethylene tanks improving the ergonomics. The ¼-turn bayonet filler cap makes for quick and easy closure. Manufactured using see-through plastic, you will always be able to see how much fuel remains at a glance. It is fitted with an integrated fuel pump system and a fuel level sensor. Additionally, the fuel line features a 90° connector to the tank for better protection against damage.

The new airbox on the KTM 500 EXC-F has been completely reworked to ensure better flow dynamics, resulting in optimal power and throttle response. Despite the obvious performance enhancements, the new design also offers maximum protection against soiling of the air filter. The large twin-air air filter is mounted on a cleverly designed stiff cage that minimizes incorrect installation. As found on previous models, filter maintenance is quick and easy and does not require tools - a standard, original feature from KTM.

All KTM EXC models are equipped with the same high-strength aluminium tapered NEKEN handlebar. The handlebar allows for four different positions. The handlebars come standard with an ODI vulcanized grip on the right side and a comfortable ODI lock-on grip, which does not require any wire or glue, on the left. All models can be fitted with an optional ignition curve selector switch on the handlebar for selecting alternative maps. The rider also has the option to activate TRACTION CONTROL from this optional switch; a unique feature which guarantees more efficient traction, especially in slippery conditions, and can be activated with the push of a button during riding.

Sophisticated 'No-Dirt' footpegs prevent clogging up the pegs, even when digging in deep ruts. The pegs on the Enduro models are 6mm higher than the ones used on SX models, which benefits ground clearance. But you can swap them at will.

The 500 EXC-F uses a new 6-speed transmission made by PANKL RACING SYSTEMS, that now features a stronger, forged raw material, ensuring the highest durability and reliability. There was no need to change the gear ratios that are perfectly matched to the power characteristics of the engine. All four-stroke engines are fitted with a gear sensor, giving the option of different engine characteristics for each gear.

The state-of-the-art Keihin Engine Management System, with electronic fuel injection, features a new 42 mm throttle body. There are separate systems for cold starting and idle adjustment, while an improved seal of the MAP sensor (MAP = Manifold-Absolute-Pressure) makes the system even more reliable. A reworked throttle cable mount allows for easy access and smoother routing of the cables. Additionally, for 2020, the ECU features new maps which have been adapted to the new exhaust, airbox and engine configuration, regulating the unique traction control and are activated by an optional map-select switch. It also provides different maps for each gear, according to the information received from the gear sensor, ensuring maximum power as you shift through the gears.

Inside the short 95 mm bore cylinder, is a new, extremely lightweight, box-in-box type piston made by König. In conjunction with a 10% lighter piston pin, it is a major contributor to the engine's high performance, low vibrations and engine-speed. The compression ratio has increased from 11.7:1 to 12.75:1 for even better engine performance. Additionally, the top of the piston has been optimized for more efficient combustion.

The multifunctional side-mounted counter balance shaft masterfully balances all the oscillating forces, while also driving the water pump. It effectively keeps engine vibrations to a minimum, resulting in the smoothest ride even at the highest engine speeds.

The KTM 500 EXC-F is fitted with the extremely durable, KTM-developed DDS clutch (damped diaphragm steel), with a wear-free steel basket and heat resistant clutch plates. It uses a diaphragm spring instead of the usual coil springs, which results in considerably easier clutch action. The diaphragm spring is also compact enough to allow for a damping system to be integrated into the clutch hub, contributing to better traction and durability. Additionally, the Brembo hydraulic system provides easy and precise clutch modulation.

The standard electric starter on the KTM 500 EXC-F uses a proven starter drive and a strong starter motor made by Mitsuba. As demonstrated time and time again, it provides quick and reliable starting, saving you precious time and energy when you need it most.

The illustrated vehicles may vary in selected details from the production models and some illustrations feature optional equipment available at additional cost. All information concerning the scope of supply, appearance, services, dimensions and weights is non-binding and specified with the proviso that errors, for instance in printing, setting and/or typing, may occur; such information is subject to change without notice. Please note that model specifications may vary from country to country.The consumption values stated refer to the roadworthy series condition of the vehicles at the time of factory delivery.